How fast can you see The Coliseum, Palatine Hill, The Roman Forum, The Pantheon, The Vatican, Castel Sant’Angelo, Piazza Navona, Trevi Fountain and The Spanish Steps? We did it in under 48 hours on foot! 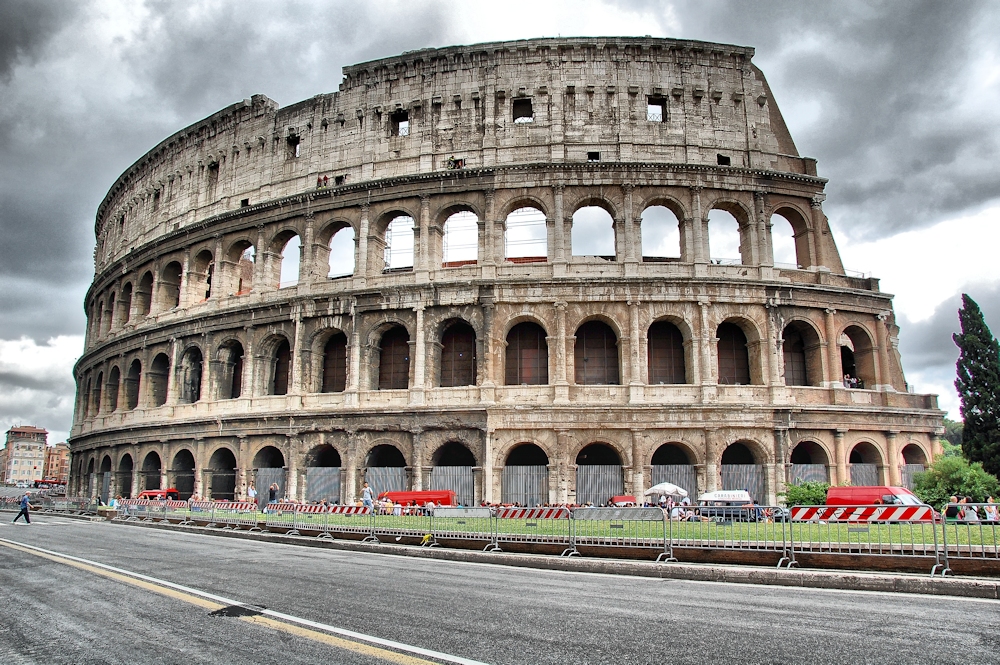 We had planned to stay 4 days in Roma, so why did we only stay two? Well as the saying goes “When in Rome…do as the Romans do”, so…we rushed, as it appeared that all the locals seemed a bit rushed. That’s really the only answer I can come up with. We rode into Roma with the intention of staying 4 days, and after 2 we had seen all that we had wanted to see, so we jumped on our motorcycles and rode further south.

We booked a hotel on the south side of the city, fairly close to the ring road and directly across the road from a Metro station. We decided that it wouldn’t be very enjoyable to ride around downtown Roma on our motorcycles, in full gear, and then have to walk around in all that gear. So we opted to park the bikes at the hotel and take public transit. That was definitely the right choice, as the transit system in Roma is excellent!

First stop…Coliseum. We wandered though all the people and found the ticket lineup. To my surprise it moved fairly fast and before I knew it we were wandering through a nearly 2000 year old amphitheater. I’m amazed by the structure and can’t imagine what it would have taken to build such a structure so long ago. I’m easily frustrated by crowds, and after walking the circumference and snapping a few photos, we leave and go in search of food. 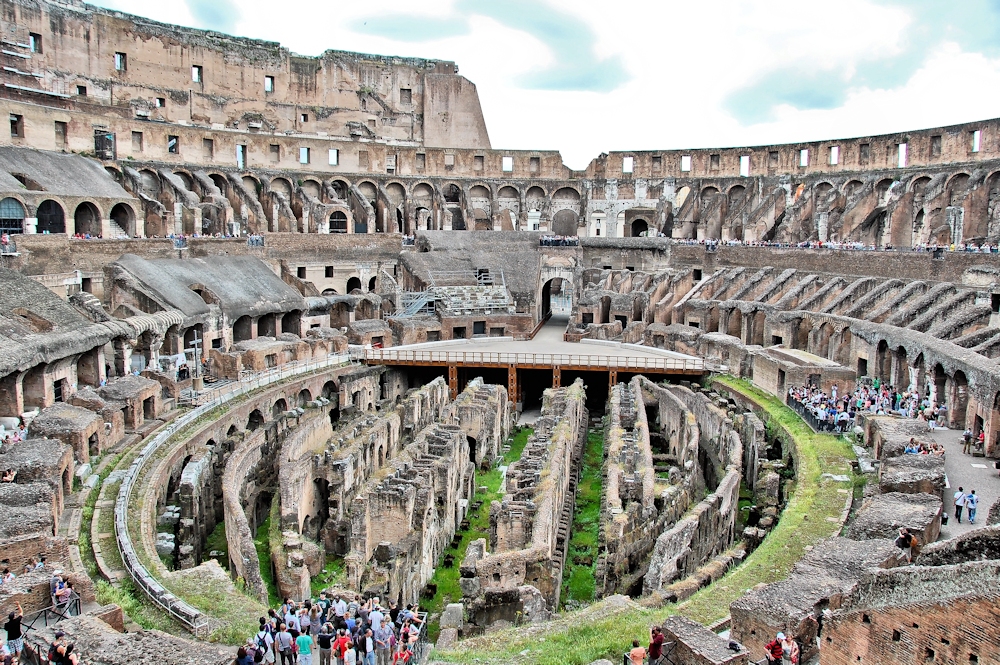 Palatine Hill and the Roman Forum. I thoroughly enjoyed this experience. Even though the structures were more in ruins than the Coliseum and not as grand, there were far fewer people wandering this area, which allowed us to stroll along at our own pace and really enjoy our time there. 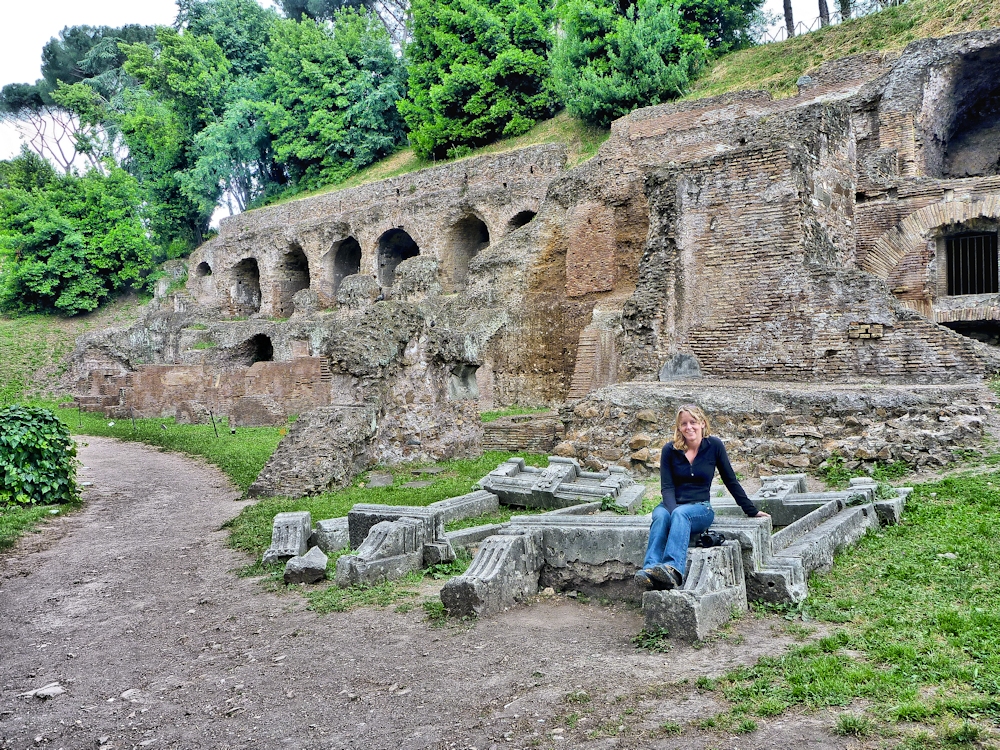 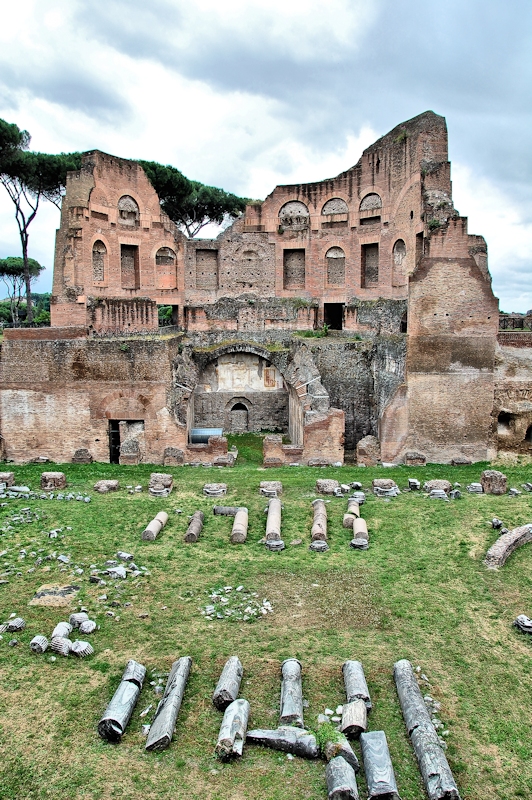 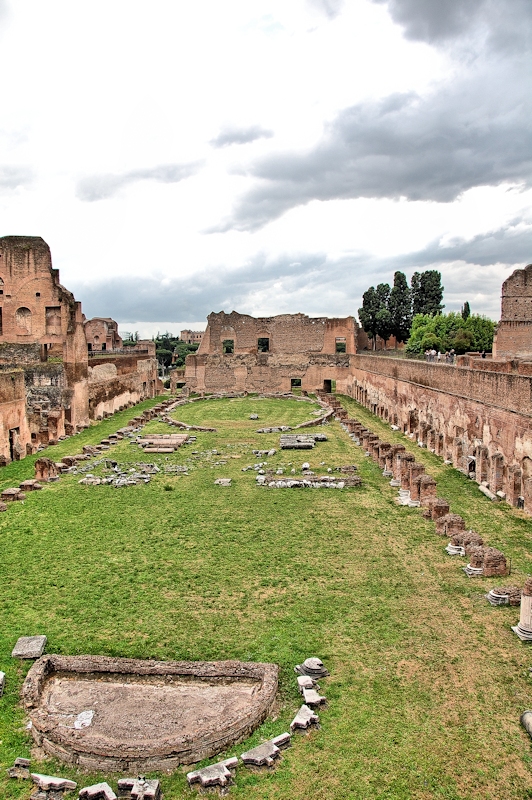 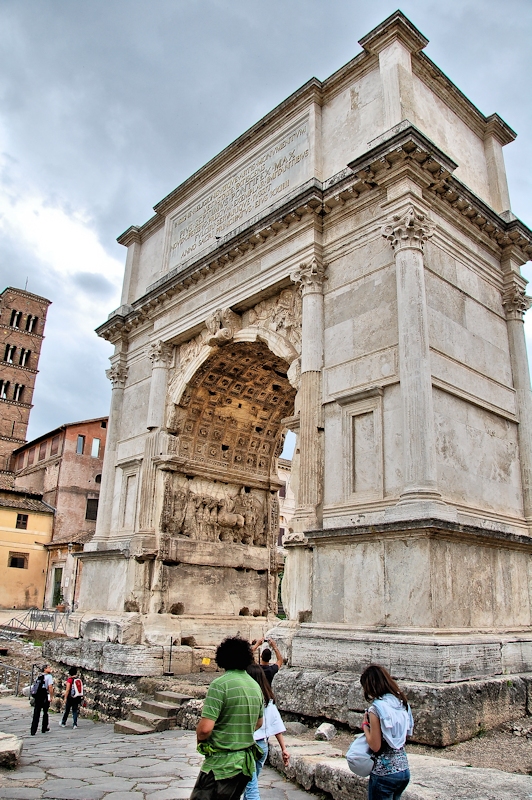 The Vatican was our first stop on day 2 in Roma. We arrived around 9am and the lineup was already pouring onto the sidewalk along the streets. Luckily we didn’t have to wait long. The Vatican was impressive with its sculptures and paintings, unfortunately the route through the Vatican is already set out for you, and you just funnel through it with hundreds of other tourists. We did manage to squeeze off to the side and let people by if there was something we wanted to look at, and we did find a spot to sit to view the ceilings of the Sistine Chapel, which were a work of art. The Vatican in itself is a work of art. 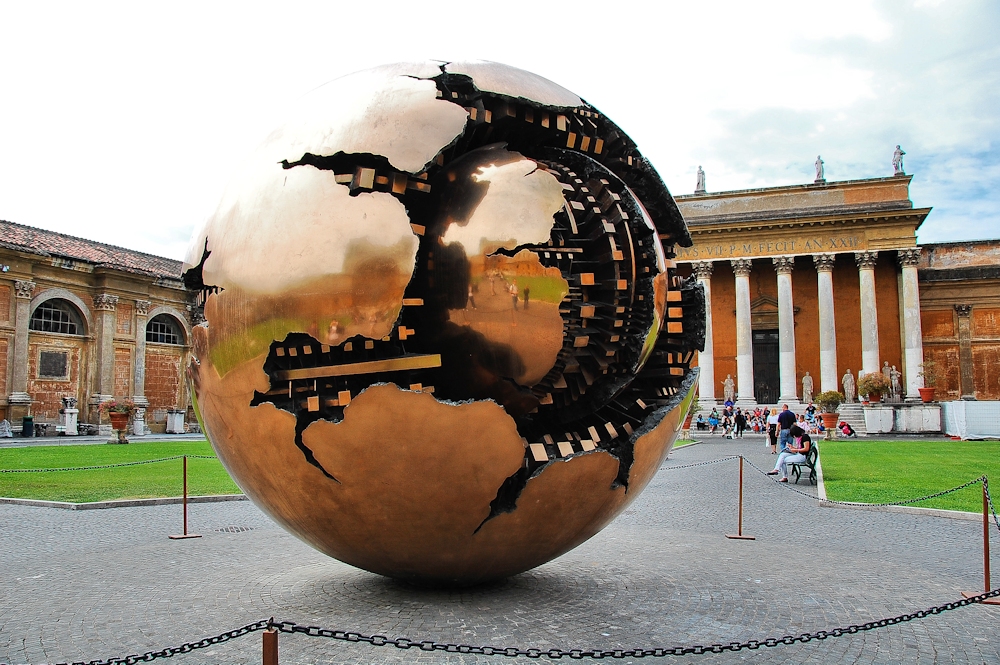 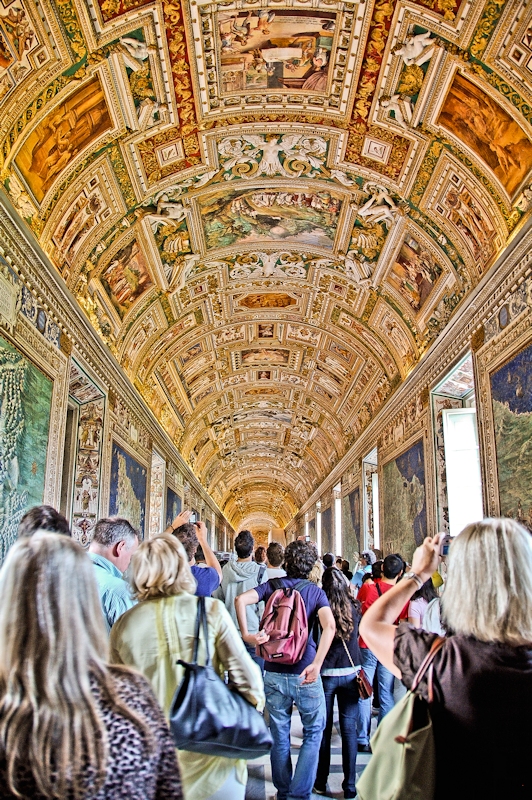 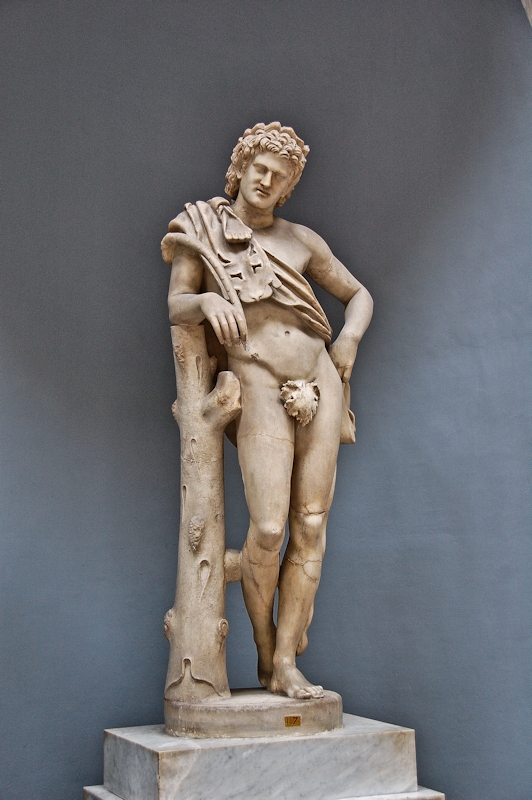 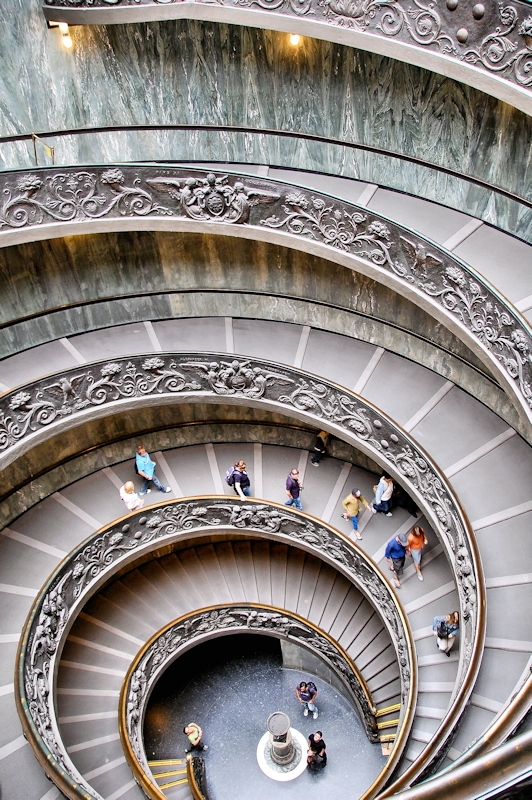 Castel Sant’Angelo is an interesting look cylindrical building. There wasn’t a lot to look at in this Castle, but I enjoyed it anyway. 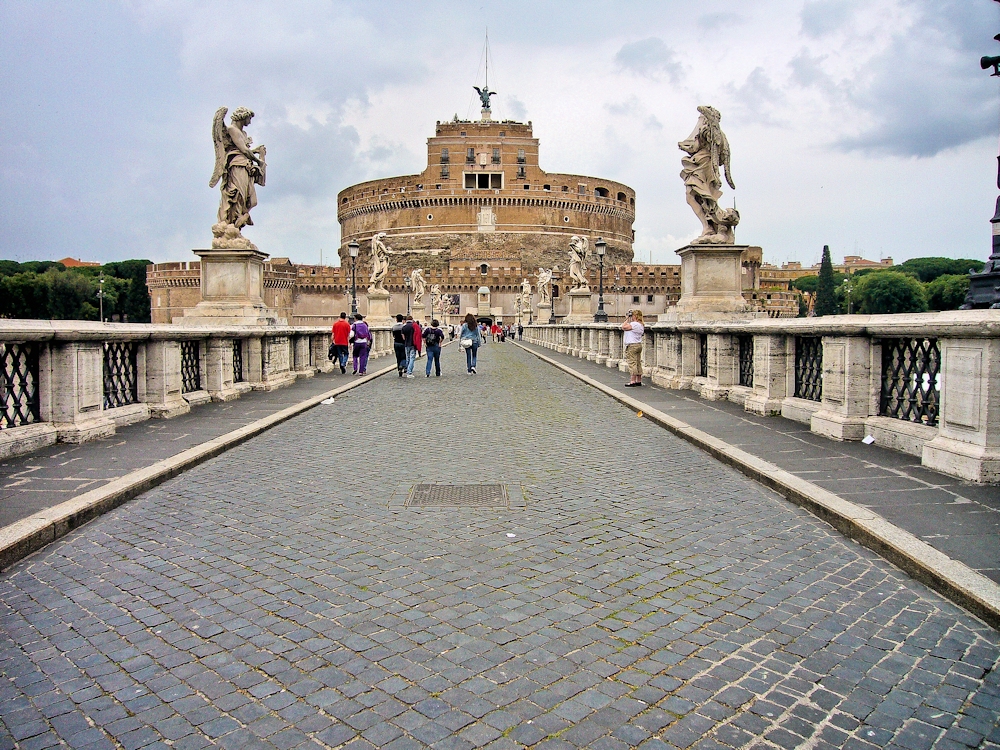 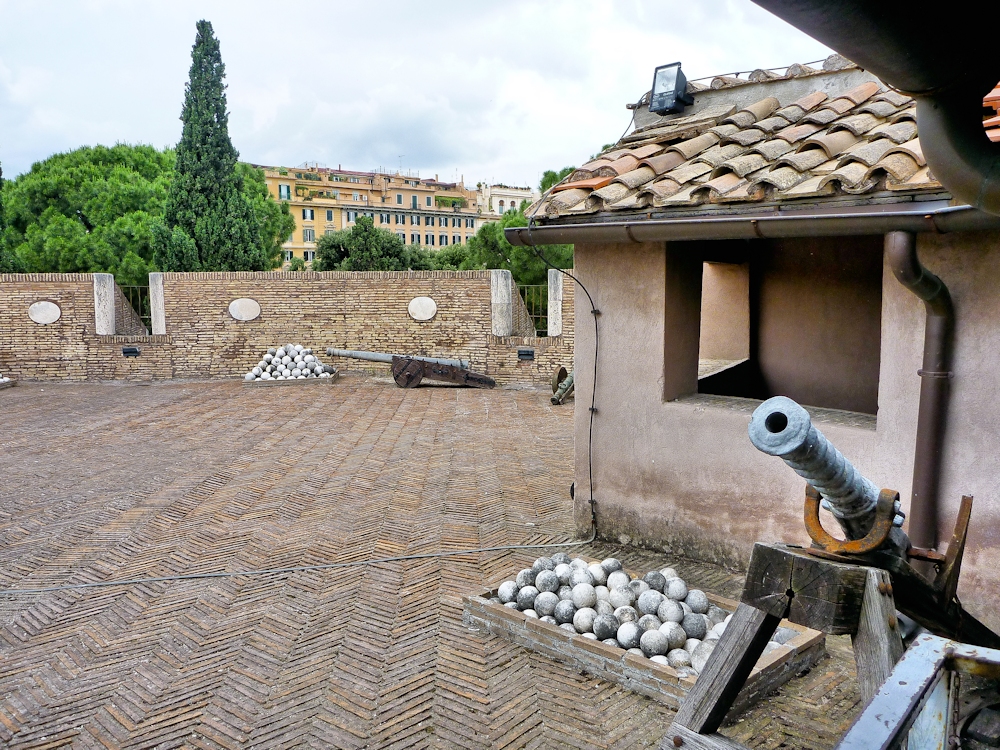 Piazza Navona and The Fontana dei Quattro Fiumi or “Fountain of the Four Rivers”. We walked into the Piazza by accident, after randomly walking streets. It had started to rain by this time and everyone else appeared to have taken cover from the rain.We, however, had come prepared! We opened our umbrella and strolled through the Piazza. 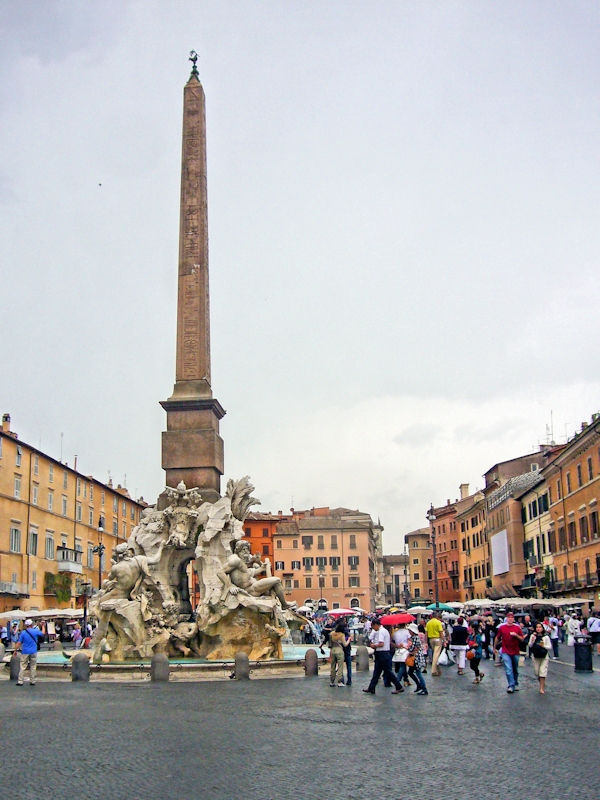 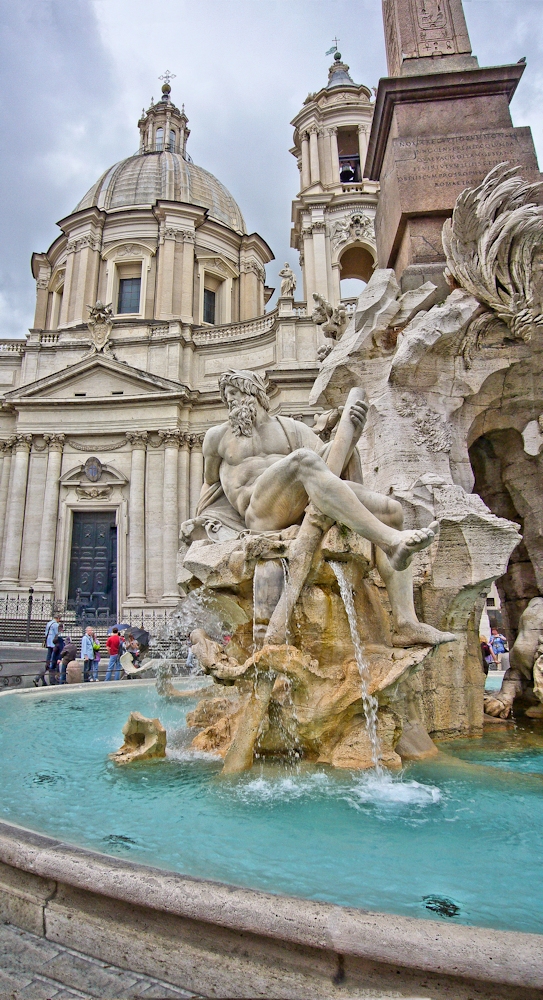 The Pantheon, yet another remarkable structure. By the time we walked to it, it had started raining much harder and everyone in the vicinity had taken shelter under the roof of the Pantheon. We found a seat inside and snuggled as we watched the rain drop through the ceiling and directly into a penny sized drain hole in the ceiling. 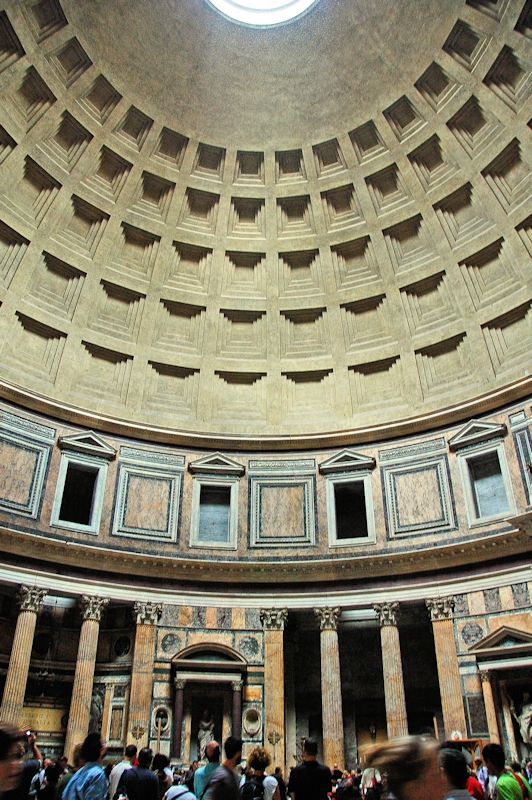 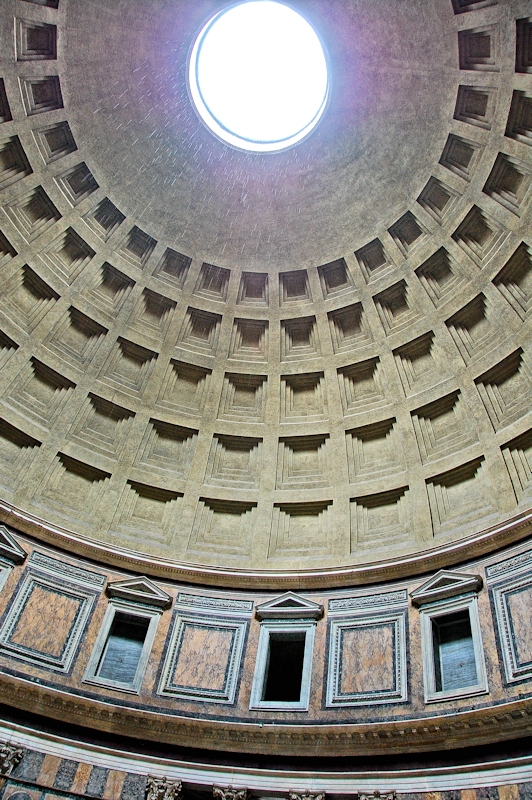 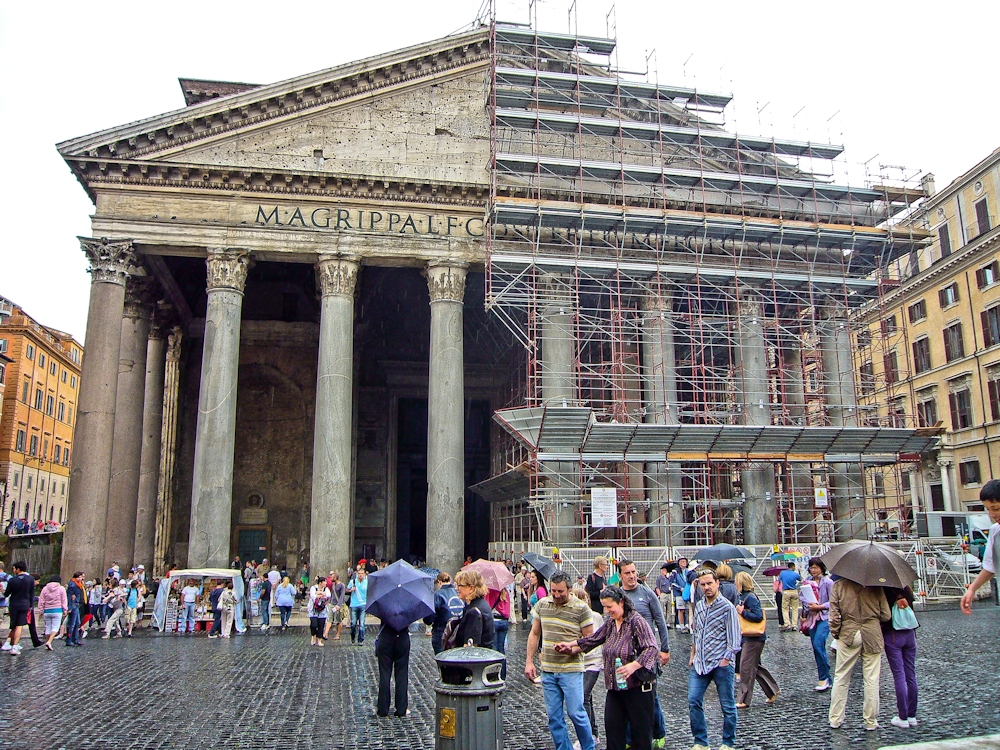 Trevi Fountain, the most famous fountain in the world, definitely worth seeing. If I ever go back, I will visit the fountain at midnight in hopes of there being less people there. But as the story goes: throw a coin into the fountain if you wish to return. I did not throw a coin but I don’t believe I’ll need luck to go back. However, had I have know where all the Euros that end up in the fountain actually go, I would have thrown one in just to support a good cause. As per Wiki: An estimated 3,000 euros are thrown into the fountain each day. The money has been used to subsidize a supermarket for Rome’s needy. 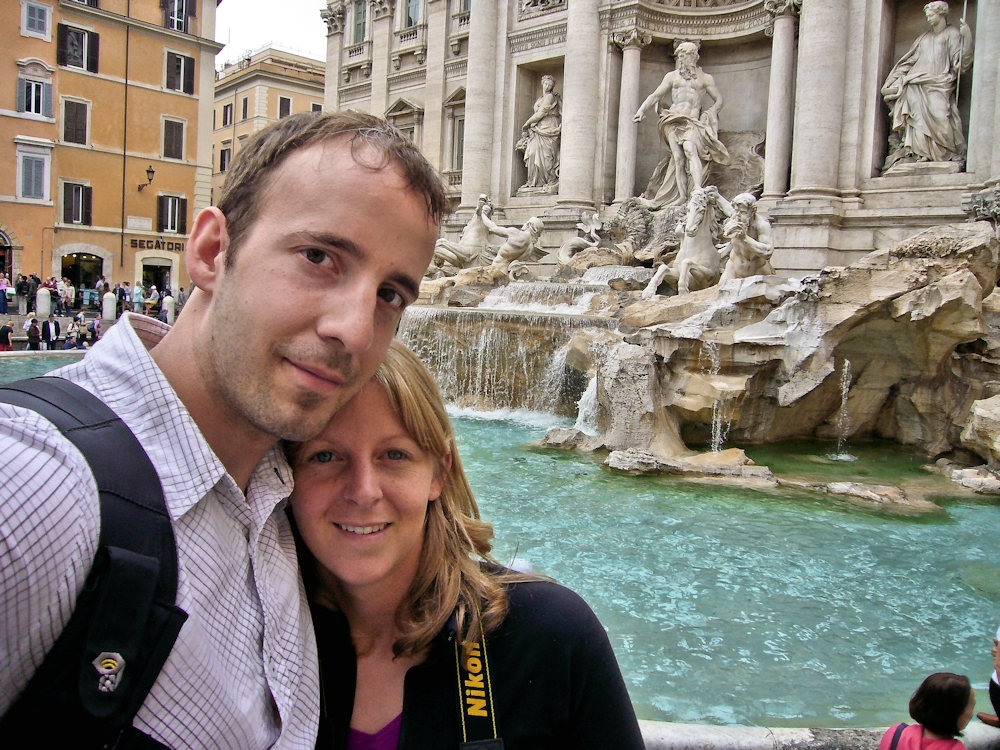 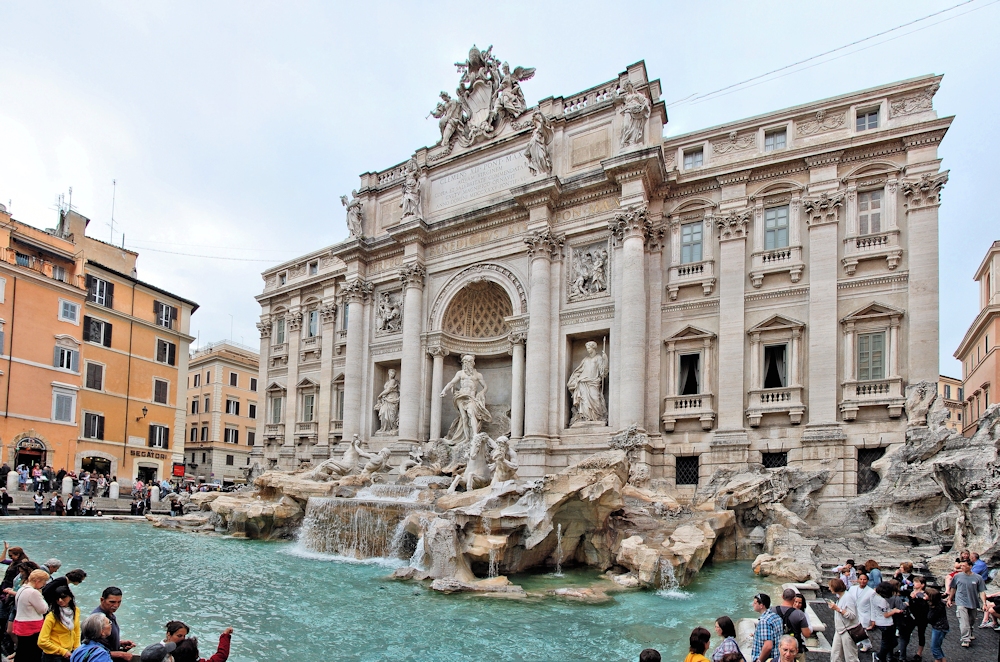 The Spanish steps, designed by the Italian and built by the French to connect the Spanish embassy to the Holy See. I would have loved to see these when all the flowers were decorating the stairs, but apparently it was people season and not flower season. 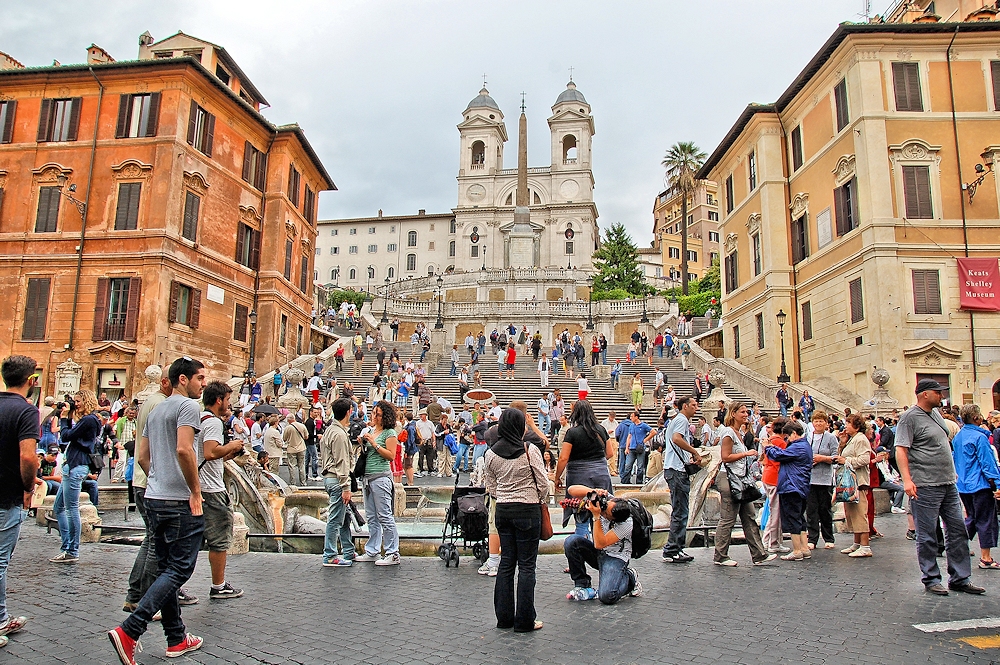 I wasn’t joking about all the people! This is on the way to the Spanish steps. 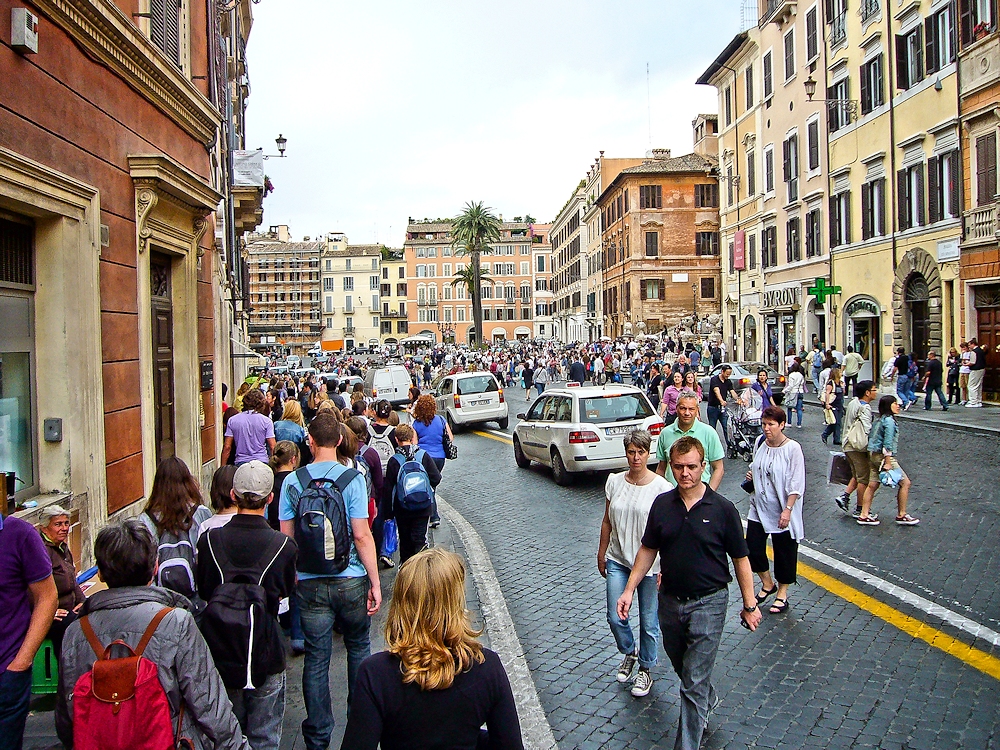 Below are a couple of random side streets near the Spanish steps. 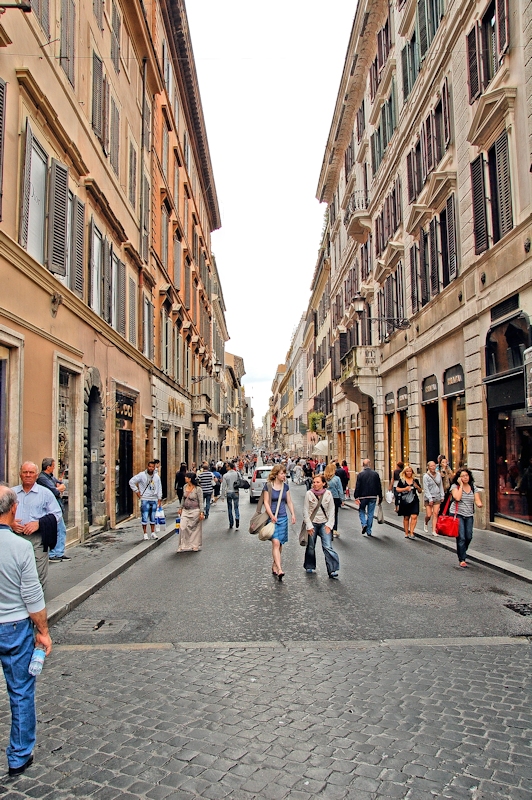 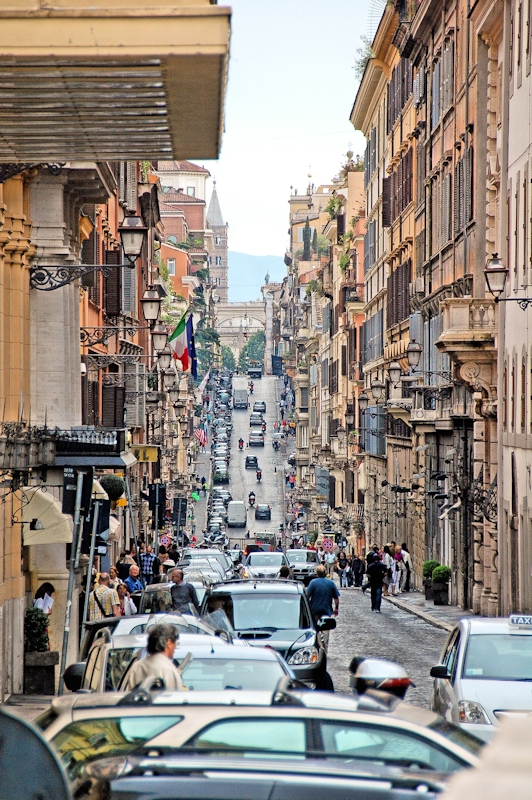 This concluded our tour of Roma, we took the Metro back to our hotel and got ready to ride to Sorrento & the Amalfi coast in the morning.

I will return to Roma, but next time I will not go there to see the tourist attractions, as I think I may have missed out on the true essence of Roma.